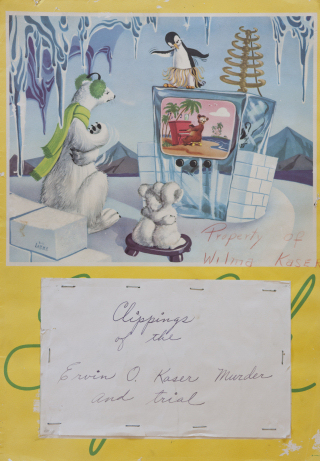 Here’s the first chapter, more of an extended introduction, about how I became aware of Ervin Kaser, his murder, and everything else.  It may be a few weeks before I post further pieces of this, as I’m in the process of going through dozens of audio tapes that I’ve made over the past 10-12 years, looking for pieces that apply to this story, and listening to and transcribing the tapes is a painfully slow process.

I have very few clues as to the date of my earliest memory that relates to the murder of my uncle Ervin Kaser. I was probably between six and eight years old, certainly not more than that. My mother, Wilma, barely reached five feet if she was a little sloppy with the yard stick, and in my memory I wasn’t more than two thirds of her height, if that. We were walking north on First Street, between East Main and Oak Street, on the left side of the street. There used to be a dime store along that block, and I think a jewelry store of some sort on the corner of First and Oak. All of those buildings are gone now, replaced by a parking lot for the nearby bank. I remember it being a fairly nice day, so it was probably in the summer. Just as the two of us reached the corner, we encountered a man coming from the other direction, and both he and my mother came to a sudden stop. He smiled, touched the bill of his hat, and said something like, “Good morning, Mrs. Kaser!” My mother didn’t say anything to him, but the tension in her body was obvious as she recoiled from him. She grabbed my hand and said, “Come on!” and pulled me around the corner and down the sidewalk. As I struggled to keep up, I asked, “Who was that?” Her only answer was, “Cap Oveross.”

I was young at the time, but even then, the emotional intensity of that brief encounter was obvious enough to burn those few seconds into my memory forever. I don’t know how or when I became aware of who Cap Oveross was and why my mother had reacted that way. I don’t remember if she explained about my uncle’s murder on that day or not.

We moved into a new house in early 1961, and in the garage there was a pull-down folding ladder that gave access to the attic. A small area had been floored with plywood, and it was used as a cramped storage space. For an eight or ten year old boy, of course, that space was magical, and who knew what fascinating things you might find up there? My folks had an old round-topped trunk up there with a miscellany of items. I can imagine the kinds of stuff that was probably in that trunk, but the only things I remember for sure were a large dime-store scrapbook and a paper sack with three old magazines. I’m pretty sure that it was my discovery of those, and the questions that followed, that were the real beginning of my awareness of the murder of an uncle I never knew.

The scrapbook contained many, many newspaper clippings from the Capital Journal and the Oregon Statesman, both Salem newspapers, from the Portland newspaper The Oregonian, and from the local weekly Silverton Appeal-Tribune. They covered the entire run of events, as reported in the newspapers, from the killing of Ervin Kaser through the trial of Casper “Cap” Oveross, his acquittal, and a few brief mentions afterwards. 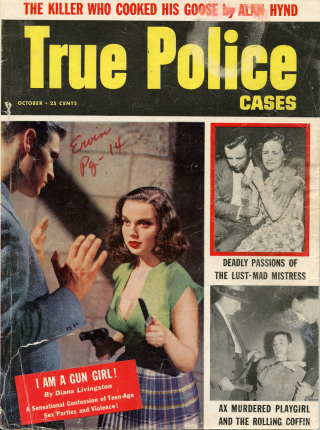 The paper sack contained three magazines, the August 1955 issue of Real Detective (“Whodunit?”), the October 1955 issue of True Police Cases (“To Love, To Die – Never cheat at the game of love”), and the August 1955 issue of Official Detective Stories (“Me, I Shoot. Anything Wrong with That?”). These magazines were the typical sensationalistic nonsense that graced the news stands of the day, a hybrid of Great Depression era pulp detective fiction magazines and actual news reporting. All of the stories were sensationalized to one degree or another. In one, everyone’s given a short nickname: Ervin is Erv, Emanuel (Mannie) is Em, Melvin is Mel, and nowhere is Cap’s actual name of Casper even mentioned. I’m being generous when I say the prose was florid:

The news of what had happened started coming over the telephone wires strung through the big Oregon firs within an hour of his arrest, and they couldn’t believe it. Some of them slipped into their fur-lined windbreakers or big red-plaided lumber jackets and drove into town to talk it over.

I took the magazines and the scrapbook down out of the attic and started asking my parents about it, and they answered what questions they could. I was always fortunate that my parents had little reticence to talk about pretty much anything I asked. Unfortunately, as I grew up and moved away from home, got married, had kids … life happened. By the time I thought about digging deeper into it, most of my aunts and uncles had passed away. However, they probably wouldn’t have told me any more than what they’d already told the police and was in the police reports, and some of them probably wouldn’t have wanted to talk about it anyway. So, I can only tell this story from the information available. Police reports, newspaper articles, sensationalized magazine stories, a few verbal memories, a few court records. There are no transcripts of the trial itself. Because the verdict was “not guilty,” there was never any possibility of a re-trial or appeal, so the court recorder’s records were never transcribed and appear to be long gone. And yet, a reasonably complete story can be pieced together, and that’s what I’ll try to do throughout the rest of this book.

Some years ago, my father had a friend who was a Deputy with the Marion County Sheriff’s office, and he made a photocopy of the County Sheriff’s file on the case. After reading through it, his comment to my father was, “You know, that was the worst miscarriage of justice I have ever witnessed or heard about in my life!” A few years after that, I applied for and received a scanned copy of the Oregon State Police case file which was a close duplicate of the County Sheriff’s (they sent copies of reports to each other), but it had a few extra pages and a few crime scene photographs that were not in the copy from the County Sheriff’s office. Also, the State file had been somewhat redacted: the names of people who had been minors at the time were blacked out, as well as one person who had asked to be treated as a confidential informant, and one instance of medical information regarding Ervin’s wife Mary. But even without the non-redacted County Sheriff’s reports, it would have been relatively easy to replace the names that had been redacted, as it was pretty obvious who was speaking or being spoken about, as most of them were well-known family members and neighbors. 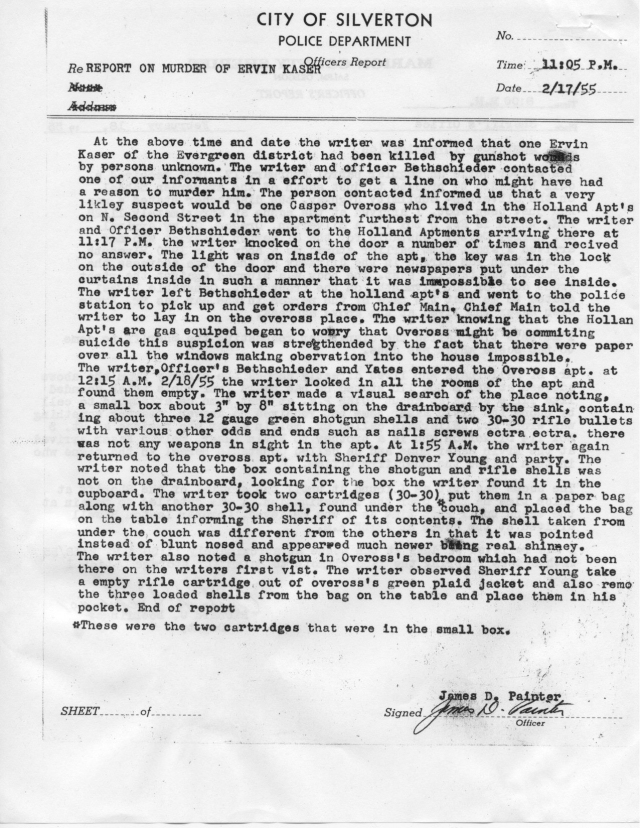 Reading those police reports and newspaper articles transports me back to a different time, a different world. Modern forensic science was just beginning and was quite primitive compared to today’s standards. The police were often just average Joes off the street with no particular background in law enforcement, sometimes without even having graduated from high school. My father, Calvin, was an officer on the Silverton police force for about six months in the early 1950s, and his formal education stopped at the end of the 8th grade, he was needed to help run the farm in the late 1930s. The police reports are often rife with misspellings, and sometimes out-and-out wrong names, and the phrasings used by the writers of the police reports and the newspaper articles sound quaint to our ears today.

But before diving into the details of the murder, the investigation and the trial, who was Ervin Kaser? Where did he grow up? What was his life like? What was he like?

3 thoughts on “Not Innocent: Awareness”