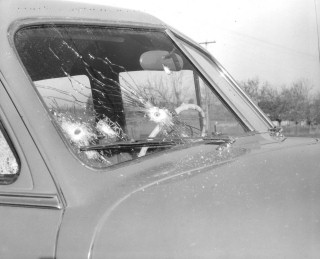 I’ve started work on a book about the murder of my father’s oldest brother, to be called Not Innocent: The Murder of Ervin Oren Kaser.  The book is not intended for general publication, but is something I’m putting together for my family, of which many of the younger members have never even heard of Ervin Kaser or the fact that he was murdered.  The killing was planned, premeditated, and quite fascinating 57 years later.  At the time, it was horrific, frightening and incredibly sensational, in the way that sex and celebrities and everything else is sensational today on “entertainment news” TV shows and tabloid magazines (at least, for 15 minutes…).  Below  is the preliminary Introduction to that book.

In February 1955, Silverton, Oregon was a small town with a population of around 3150, less than a third of today’s population of almost 10,000, surrounded by vast farm lands and mountain forests. This was before the wars in Iraq (both of them) and Afghanistan, before the Twin Towers came down, before Clinton and Monica, before the other Bush and Reagan and Carter and Ford and Nixon and Johnson and Kennedy and Oswald. This was before Vietnam, before race riots and civil rights marches, before the Summer of Love and sex and drugs. Getting into trouble then consisted mostly of drinking too much on a Saturday night and tipping over some farmer’s outhouse, or stealing some chickens and inviting the unknowing owner of the chickens to your barbeque. Television was in its infancy, and even if you had a television, you were lucky if you received two or three stations, channels in today’s vernacular. If a single woman bought or sold property it would say “an unmarried woman” after her name on the deed. If someone was shot on TV (usually in a western), you only knew it because they fell down and stopped moving. Shocking was when a man said goddammit! in public in front of a woman. There were no drive-by shootings and no cable channels with blatant sex scenes, no flood of cop and lawyer shows every hour with splashed-red gory murders.

In February 1955, few couples “lived together outside of wedlock,” having a child outside of marriage was a life-altering scandal. It happened, and people had affairs, too. But the social mores were much stricter, there was a higher social price to pay for breaking the standards of proper behavior. There were no cell phones, your phone was tethered to the wall by its cord, and you couldn’t carry it around the house or across the country side. Most people had “party lines” where 8 to 10 people all shared the same phone line, and you could lift your receiver at any time and listen in on someone else having a ‘private’ conversation if they didn’t hear the click of your receiver coming off the hook. Most men wore a hat, and they weren’t baseball caps or stocking hats. Pretty much every car driven in America was made in America by an American car manufacturer. So were the televisions, radios and just about every other device. “Made in Japan” was synonymous with “trash.”  “Made in China” didn’t exist because China was a communist country and we had no political relations with China, let alone trade relations.  Only in trashy detective novels and magazines and in far-away big cities did people commit murder.

In February 1955, I was just a few months past my second birthday. My life consisted of learning to walk, talk and not make a mess in my pants. I was still too young to know that the world was a little bigger than my mother’s arms. I was just beginning to learn that I was low man on the totem pole with two older brothers and an older sister who would one day take joy in washing my face with a dirty dishrag. I was too young to know my aunts and uncles and cousins, or even what aunt, uncle and cousin meant. I was too young to know the meaning of love and sex and jealousy and rage and murder.

In February 1955, my father’s oldest brother was 49. He sat in his car in the driveway of his home in the farm land south of Silverton, Oregon. It was a cold, clear February night, just before 11pm. A slug from a 30-30 Winchester hunting rifle pierced the steel post of the driver’s door, entered his back, severed his aortic artery and came to rest nestled against his heart. Three more shots quickly smashed into the car, but my uncle was already sprawled on the floorboards and seat of the car, dead, murdered.

No one is innocent.