Case No. 42100 of state of Oregon vs. Casper A. Oveross charged with the rifle slaying of Ervin Kaser opens at 10 a.m. today in Judge George Duncan’s Marion County courtroom.

A packed courtroom is expected this morning when District Attorney Kenneth O. Brown and his special Assistant Charles Raymond begin with Defense Attorneys Bruce Williams and Otto R. Skopil Jr. the preliminary task of picking the 12 or 13 jurors who will hear the case.

Estimates of attorneys indicated selection of the jury from a regular panel of 60 and reserve list of 100 may take two to three days. Examination of prospective jurors for the first degree murder case is expected to be a slow and careful process by both sides. 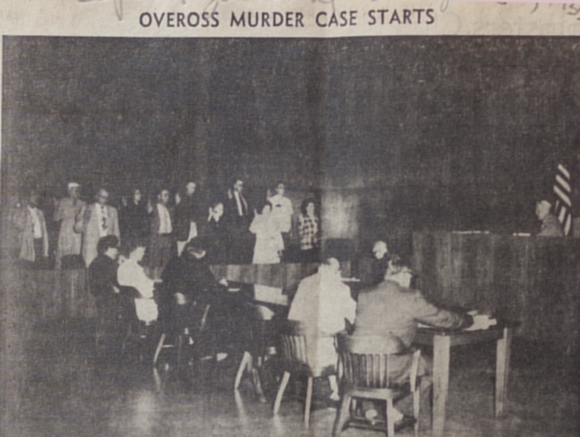 Casper A. Oveross, charged with the rifle slaying of Ervin Kaser, was brought to trial Tuesday morning when Judge George Duncan asked a panel of prospective jurymen to arise and be sworn in. Judge Duncan is shown on the bench, Charles Raymond, special prosecutor and Kenneth Brown, district attorney seated at the table on the right. At left is Oveross arrayed in white seated between defense attorneys Bruce Williams and Otto Skopil.

The morning of jury selection began Tuesday, June 21, 1955 at 10:30 a.m. The first prospective juror, Albert Alley, an employee of Salem Southern Pacific Co., was excused almost immediately because he said he had formed an opinion that would be difficult to change by the evidence. He was followed in the next hour and 15 minutes by sixteen more prospective jurors of whom only one, Fred A. Field, a retired farmer of Woodburn, was accepted. Court was recessed for lunch until 1:00 p.m.

By the end of the first day, 31 prospective jurors had been called, of which the defense and the prosecution objected to 11 each, leaving only nine who were not excused for cause, and some of those nine might yet get cut by peremptory challenges from one side or the other.  The defense and prosecution each objected to 11 possible jurors.  Approved for possible seats on the trial jury were:

During the afternoon, two more had been added to the list of possible jurors:

Most of those excused claimed to have preconceived opinions based on newspaper stories and conversations.  Conscientious objections to the death penalty got three of them excused, and a few others were excused because of being acquainted with one or more of the principals in the case.  All of the defense’s examination was done by Bruce Williams, and prosecutions examination was handled by Kenneth Brown with the exception of two which were handled by Special Prosecutor Charles Raymond.  The courtroom was filled with about 200 people, of which 160 were prospective jurors. The examinations were mostly calm and orderly with one exception.  During questioning of Mrs. Bernice L. Blodgett, Williams alluded to the possibility that jurors might be required to be kept together for the duration of the trial.  Special Prosecutor Raymond jumped to his fee in objection, asking the judge to have the innuendo that the prosecution might request the isolation of the jurors  removed from the record.  Williams stated that he wanted it clear that the defense would not require jurors to stay together for the course of the trial. 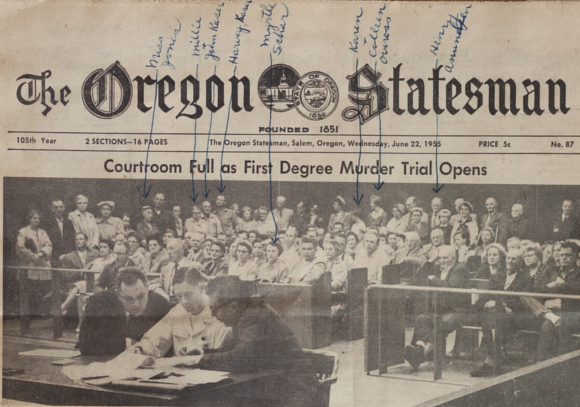 The courtroom was full Tuesday when the first degree murder trial of Casper A. Oveross, Silverton carpenter, got underway with examination of prospective jurors. Here Oveross (center foreground in white coverall) confers with his attorneys Bruce Williams (right) and Otto R. Skopil Jr. at a break in the day’s session. Most of Tuesday’s crowd was jurors waiting to be called.

Thirty-two more prospective jurors were excused Wednesday in close examination which threatened to exhaust the panel of 114 before a jury is slected to hear the first degree murder case of Casper A. Oveross.  Oveross, 43-year-old Silverton carpenter, is on trial in Judge George Duncan’s Marion County Circuit Court on a charge he shot to death his one-time neighbor Ervin Kaser the night of Feb. 17.

At the end of two full days of juror examination, 44 prospective jurors had been challenged for cause, 7 others had been challenged peremptorily (without announced cause) and two others had been excused for physical reasons.  Judge Duncan annound at the close of Wednesday’s session that court would reconvene at 9 a.m. Thursday, a half hour earlier than usual in an apparent effort to speed the jury selection to completion. 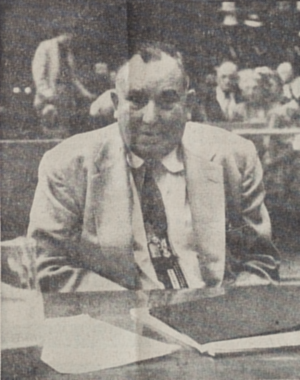 Special prosecutor for Marion County in the first degree murder trial of Casper Oveross is Attorney Charles Raymond of Portland. Raymond is show here in the Marion County Circuit courtroom where he is handling much of the state’s examination of prospective jurors. Selection of a jury was still going on when the trial recessed Wednesday night.

Of the 11 jurors in the jury box who had already been passed for cause it appeared likely that four or five of them would be removed by the 11 peremptory challenges left to the defense and prosecution.  Examination of jurors seemed to become more careful Wednesday with District Attorney Kenneth O. Brown taking a more active part than he had during the first day of the trial. Prosecution examination was almost evenly divided between Brown and Special Prosecutor Charles Raymond of Portland. Attorney Bruce Williams continued to conduct all the defense examination but conferred frequently with his partner Otto R. Skopil Jr. and with the defendant.

Challenges for cause again were almost evenly split between defense and prosecution with the 12 for the DA and 9 for the defense.  Judge Duncan rejected the prosecution’s challenge of Mr. Barnhardt.  Again most prosecution challenges were because jurors reported scruples against the death penalty alternate in a first degree murder conviction.  Defense challenges were mostly because of reported preconceived opinions or acquaintanceship with principals in the case.

A jury of nine women and three men was chosen Thursday to sit in judgment on Casper A. Oveross, 43-year-old Silverton carpenter, charged with first degree murder in the Feb. 17 shooting of Ervin Kaser.  Only four prospective jurors remained on the panel Thursday night when the last of two alternate jurors, one man and one woman, was selected.

This morning the jurors will be taken to the Evergreen Community home south of Silverton where Kaser was slain by a high powered rifle.  They will also visit the home of James W. Gilham near Victor Point which Oveross is reported to have visited on the night of the slaying and several points in Silverton where he was seen that night.  They may also visit the site on the Pudding River where the rifle which the state claims is the murder weapon was found.

The tour is expected to consume most of the forenoon hours and it will probably be this afternoon before the state makes its opening statements in the case.  It appeared doubtful that any witnesses would be questioned today.  Half of the regular jurors were listed from Salem, two were from Turner, one from Gates, one from Aurora, one from Jefferson and one from the Woodburn area.  Of the women, six listed their occupations as housewives.

A total of 123 prospective jurors were examined in choosing the fourteen to hear the case. The two alternates will hear all the evidence but will be used only in the deliberation if members of the regular jury are unable to serve.  Chosen on the regular jury were:

Coincidentally one of the alternates is a brother of one of the regular jury.  He is Walter Oldenberg, Clear Lake farmer, brother of Harry Oldenberg.  The second alternate is Mrs. Pearl Gwynn, Salem Route 6, a housewife.

The state is expected to start building its case against Oveross this afternoon after jurors are taken to several Silverton area scenes including the Kaser home where the slaying occurred.  Evidence of the state is expected to be built around an attempt to show that Oveross blamed Kaser for breaking up his marriage to his wife of 19 years, and around the testimony of witnesses who were reported to have seen Oveross on the night of the slaying. District Attorney Kenneth O. Brown, who with Special Prosecutor Charles Raymond of Portland will prosecute the case, has indicated that the rifle which the state claims is the murder weapon can be linked to the defendant.

The 63 witnesses subpoenaed by the state appeared Thursday but were excused until today because of the long process of selecting a jury.  After the jury was chosen Attorney Williams asked the court to exclued all witnesses from the courtroom except for the time they are on the witness stand.  First witnesses to be called by the state will probably be those aimed at establishing a motive for the ambush slaying.  It appeared likely that the prosecution would emphasize that Kaser was “shot in the back” by an assailant who apparently followed him home from Silverton some 2 1/2 miles away.

Examination of jurors to hear the case was speeded considerably Thursday at the request of Judge Duncan and a total of 46 prospective jurors were challenged or excused during the day in contrast to the 31 of Tuesday and 32 of Wednesday.  In addition to frequent challenges for cause, principally on grounds of preconceived opinions, objections to the death penalty, or acquaintanceship with principals, a total of 21 peremptory challenges were used.  Of these the defense exercised 15 of an authorized 16 and the state used up 6 of 8.

Judge Duncan took a more active part in the juror examination Thursday, questioning several prospective jurymen at length on their reported conscientious objections to capital punishment.  During examination of Grace T. Hockett, Salem High School teacher, he denied the prosecution’s challenge for cause three times. She was later excused peremptorialy, presumably on a challenge by the state.

Task of selecting the jury took just over 14 hours over a period of three full days, longest at least in the recent history of Marion County.  It brought scores of spectators to the courtroom, indicating that it will probably be jammed when the questioning of witnesses gets underway.  The court is scheduled to reconvene at 9:30 a.m. today at which time jurors will depart for the Silverton scenes.

Judge Duncan advised the jurors that they would not be required to remain overnight in isolation at the courthouse, but would be permitted to go to their homes at least for the time being.  He cautioned them against discussing the case with anyone including other members of the jury and against discussing any other matter with principals of the case.

Next up: The Trial Begins