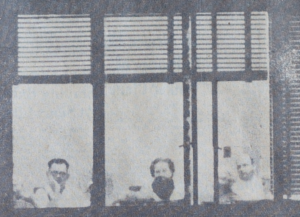 Statesman–Camera Catches Glimpse of Jury Deliberation. Casper A. Oveross, on trial for murder, spent Wednesday night in Marion County jail while three floors below these juurors debated the firsdt degree murder charge against him. Taken with the aid of a telephoto lens from the Grand Hotel building, this photo looks through windows in the jury room which are normally curtained. Extreme heat in the courthouse Wednesday night probably caused jurors to open them. The jury of nine women and three men retired late Wednesday night without reaching a verdict.