I’ll take a short break from writing about the murder investigation to update the layout of property in the area, and give a little sketch of family ‘background’ and the history of the property transfers.  A lot of this won’t be of much interest to folks other than close family members, but some of it will help a great deal in understanding what’s said in the police reports, about people interviewed, locations searched, etc.

In earlier posts, I included a map of the Evergreen District, showing where different people lived at the time of the murder and how the farms were laid out.  I’ve dug up a little further information, some provided by family members, some from the Marion County Recorder’s office.  Here is an updated version of the map: 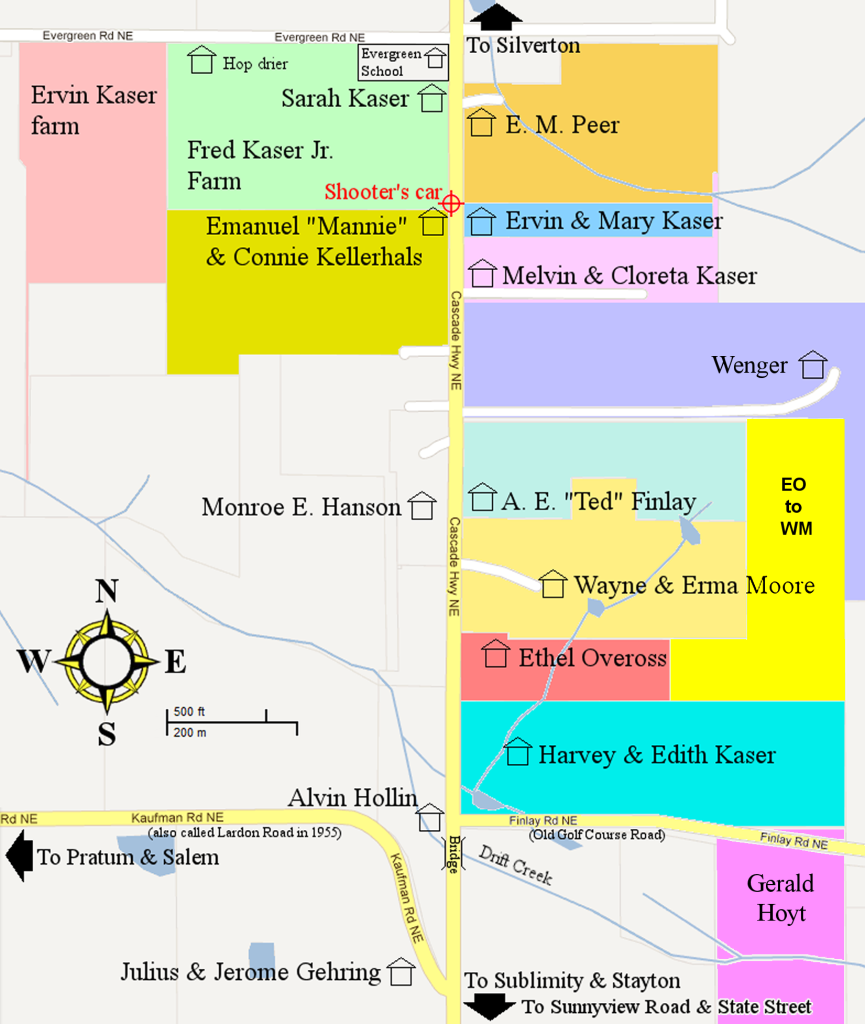 Farms in the Evergreen district at the time of the murder.

The changes from the earlier map are the back section of Ethel Oveross’s property that had been sold to Wayne Moore (denoted by the bright yellow area labeled “EO to WM,” and the addition of a 20-acre farm owned by Gerald Hoyt.

The Knight family had been in the Marion County area for a long time, too (there are many land transactions involving the Knights going back at least into the 1880s), but as of 1929 there was only one plot of land in this vicinity owned by a Knight, and that was the 20-acre parcel at the bottom of the map labeled “Gerald Hoyt”.  That parcel belonged to Fred D. Knight.

James & Sarah Finlay had several children. I’m not sure how many, but at least one boy (the father of A. E. “Ted” Finlay) and at least two girls Ella and Edith.  This is NOT the Edith that married Harvey Kaser, so don’t get confused!  This Edith Finlay married a Philippi man, and that’s where Edith Kaser’s Philippi cousins that are mentioned in the police reports tie in.  Ella Jane Finlay married Fred Knight (see, it’s starting to come together).  On a 1929 plat map of the area, the piece on the map labeled “Gerald Hoyt” is shown as owned by “F. (Fred) D. Knight.”  The pieces labeled “Harvey & Edith Kaser,” “Ethel Oveross,” and “EO to WM” are shown as owned by “E. J. Knight” (Ella Jane Knight, Fred Knight’s wife, they were married in 1895).  On that same map, it appears that the pieces labeled “Wayne & Erma Moore” and “A. E. Ted Finlay” were owned by “Edith Philippi,” the sister of Ella Finlay Knight. The piece marked as “Wenger” appears to have been broken up into three long and very narrow pieces owned by Wenger, Lefevre, and E. A. Finlay, which were later re-assembled by Wenger.  So apparently there was some significant shuffling of property ownership between 1929 and 1955.  Regardless, much of that area was then owned by those two sisters, Edith Philippi and Ella Knight.

Ella and Fred Knight started their married life on a homestead near the Winter Falls (part of what is now Silver Falls State Park), then probably around 1900 built the old farm house on the property shown above as “Harvey & Edith Kaser.”  As of the mid-1940s, it had no indoor toilet, and the only “running water” was a hand pump in the kitchen that brought water up from a hand-dug well under the house.  They had four children, two older boys both of whom died in their 20s, and then much later twin girls: Edith and Ethel, born in 1914.  Edith married Harvey Kaser January 7, 1936.  Ethel was already married to Casper Oveross at that time, as they’re both listed as witnesses (as “Ethel Oveross”) on the wedding license for Harvey and Edith.  Both couples lived in various places for a few years.  Harvey & Edith had a 20-acre farm that Harvey’s (and Ervin’s) father Fred D. Kaser had purchased for him in January 1934.  It was across the road and further west from the piece labeled as “Ervin Kaser farm” in the map above.

Ervin Kaser and Mary Huntley were married October 21, 1939 and lived in an old house on the “Ervin Kaser farm” on Evergreen Road.  In August 1944 they bought 5 acres on the Cascade Highway (labeled “Ervin & Mary Kaser” in the above map), and Ervin built a new house there.

My father Calvin (Harvey’s youngest brother) said that Harvey and Edith lived in Harvey’s place on Evergreen Road after they were married, and did some remodeling on the old farm house on that land soon after their marriage.  They had Ted Finlay (yes, A. E. “Ted” Finlay, Edith’s first cousin) come out and wire the house, and when they turned the lights on, Harvey said, “Hey, those lights are bright!” and then all the bulbs started popping. Turned out Ted had wired the lights to 220 volts rather than 110.  The timing that follows is uncertain.  At some point in the 1940s, they sold that place to Alfred and Marie Von Flue, who were renting the old Fred & Bertha Kaser (Harvey’s grandparents’) house on Hibbard Road, and the two couples just “swapped houses,” with Harvey and Edith moving their family into Fred & Bertha’s old house.  They lived there (renting) for a while, somewhere between 4 and 18 months.   In August 1946, Fred & Ella Knight ‘sold’ (for $10) a 2.63 acre piece to Ethel and Casper Oveross.  It was right on the Cascade Highway, in the northwestern corner of the piece labeled “Ethel Oveross” above, and at some point, either before or after this sale, Ethel and Casper moved into an old house on that parcel.  Edith’s and Ethel’s mother, Ella Knight, died around 1947, and Harvey and Edith moved in with her father Fred Knight in the old farm house on what’s labeled as “Harvey & Edith Kaser” in the map above.

Harvey’s and Calvin’s brother Melvin Kaser came back from World War II (he fought in Europe), and he and his wife Cloreta bought their property (shown above) in November 1946.  Melvin took over running their father Fred Kaser’s hop yard because Fred was physically unable to do it.  In March 1948 my parents, Calvin & Wilma Kaser moved to Tillamook (on the Oregon coast) where they’d bought a dairy farm.  Calvin’s older brother Orval had done the same thing not too long before.

After Harvey and Edith moved in with her father, Harvey put in a septic tank, built a water holding tank, ran a water line from a spring up by the barn down to the holding tank, closed in the wood shed on the back of the house and put in a toilet, so the house then had running water and an indoor toilet.  They lived there with their three boys (at that time) Fred, Ray and Jeff for a year or longer.  They decided to build a new house right in front of the old house, but Harvey said something like, “I’m not going to live in that old house very long, and I’m not building a new house without owning the property!” In December 1948, the 28 acre parcel labeled “Harvey & Edith Kaser” was deeded to Harvey and Edith, and an additional 24.84 acres surrounding Casper and Ethel Oveross’ 2.63 acre home was deeded to Casper and Ethel, bringing their total property to 27.47 acres (the two pieces shown above as “Ethel Oveross” and “EO to WM”).  Each couple filed a “quit claim” on each others’ property to relinquish any rights to it.  At the same time (December 1948), the 20-acre piece (labeled “Gerald Hoyt” above) south of Finlay Road was also transferred to Ethel and Casper Oveross (for $1).

Harvey and Edith started building a new house immediately in front of the old farm house in the spring/summer of 1949.  Their son Ray remembers walking out of the front of the old house, down a couple of steps, across a plank and into the back door of the new house, so they were very close together.  Edith’s father Fred Knight died about a week before they moved into the new house, just before Thanksgiving 1949.  For a few years, the two families lived next door to each other, and were very close with constant traffic between the two houses.  Casper Oveross, who was a carpenter, started building a new house on their property, too, probably in 1950.  Miles Ottoway, who had built the new house for Harvey and Edith, came back in the spring or summer of 1950 and tore the old farm house down just to salvage the lumber.  The kids of the two families, Colleen and Karen Oveross and Fred, Ray, and Jeff Kaser, ran back and forth, playing together and socializing.  Colleen and Fred were about the same age, both born around 1936, Ray was a couple of years younger, Karen was born around 1942, and Jeff in 1945.

My sister was born in Tillamook in 1950, then my parents, Calvin & Wilma Kaser, moved the family back to Silverton after the dairy went belly-up in early 1952.  I was born in Silverton later that year.

Life went on, but by 1954, Casper’s and Ethel’s marriage was falling apart.  Casper filed for divorce, claiming that Ethel was running around with other men, and one in particular.  Evidence and testimony shows that Ethel was runing around with Ervin Kaser before the divorce, but the marriage was probably “fatally wounded” before then.  Several people that I’ve talked to, that were around then, have said that Cap had a drinking problem (which would seem evident by the amount of time he spent in local taverns), and that Ethel had to work to provide enough money for herself and the kids.  Most of that is hearsay, though, and the only thing we know for sure is that Ethel and Ervin were seeing each other before the divorce was final, certainly by the spring of 1954.

Cap filed for divorce from Ethel August 20, 1954, and moved out of the house the next day.

Edith Kaser had given birth to her’s and Harvey’s fourth son earlier in August 1954, and he was to be the last of us “Kaser first cousins.”  He and I spent many Sunday afternoons together building forts in the hayloft of their barn (that had been built by his grandfather Fred Knight).  I’d go home with my nostrils almost black from all the dust I had inhaled.

Ervin’s and Harvey’s father (my grandfather, Fred D. Kaser) died in August 1953.  Their brother Melvin had given up on running the hop yard on his mother Sarah’s farm.  When the crops were harvested that summer, Ervin took them down to the farmer’s co-op and deposited them in his account, rather than their mother Sarah’s. Harvey found out about it, and the two of them got into an argument and had a falling-out over it, but the money got moved back into their mother’s account.

At the end of June 1954 (two months before the Oveross divorce), Ethel and Cap sold the back end of their ‘L’-shaped property to Wayne Moore, leaving just 8 acres on the front for Ethel Oveross.  The sale price in the deed was $10, but it was probably sold on contract before that date for a much larger sum of money.

On November 15, 1954, for $2,000 Casper sold the 20-acre farm south of Finlay Road to Gerald W. (Jerry) and Lillian F. Hoyt.  Jerry Hoyt was a bartender at the Town House tavern in Silverton, and also ran a small grocery store on the south side of East Main Street where now there’s a park.  He testified that Casper came into the Town House at about 12:45 A.M. the night of the murder, left about 1:20 A.M., and had not been at the tavern during the time of the shooting.

In October 1955, Ethel bought a place in Stayton and moved there.

Next: back to the investigation.